It was a few minutes past 7:00am and all was black inside the car rental store in downtown Vancouver. I’d arrived early with the sole purpose of getting out of town in time to catch an 8:30am ferry over to Vancouver Island. I even reserved my space to ensure I’d get on. My plan was to be in Tofino shortly after lunch, maximize my time and familiarize myself with the town. Murphy’s Law had other plans.

It wasn’t long before I found out the opening staff members wife’s car has been crushed by a cement block outside a condo development she parked beside the night prior. He was “running late” and the company wasn’t sure how long it’d take to get someone there.

Clearly, we were all off to a perfect start to the day.

I’m a pretty relaxed person, but my closest friends can tell you I’m a stickler when it comes to time. If there is one way to push my buttons it’s by being late, making me late, or screwing up my A-type personality’s plans. Thankfully, I had the sense to pick up a Greenhorn coffee beforehand because I was needing a drink.

It’s amazing how long an hour can feel when you have somewhere you desperately need to be. Time ticked away and the line up of customers grew. We were all annoyed…but probably not as annoyed as the staff member’s wife.

Timing would have to be on my side to realistically make it to the docks, let alone on the boat. A staff member finally arrived. I got my car, zoomed through the underground parking and had less than 20 minutes to get to Horseshoe Bay.

Pedal to the metal time

I have a habit of driving too fast, but it certainly came in handy that morning. I arrived to take my place in a long line up of vehicles waiting to board.  After tweeting BC Ferries in a desperate attempt to bypass the line (I’d booked an earlier reservation), they let me know there was a chance I’d still make it on and wished me luck. They had super fast customer service and I was impressed to get such a quick and friendly response.

Personnel were giving out newspapers to drivers. A thoughtful touch, but it didn’t provide much hope. I guess they figured we’d all need something to read if we had to wait over 2 hours for the next ferry. 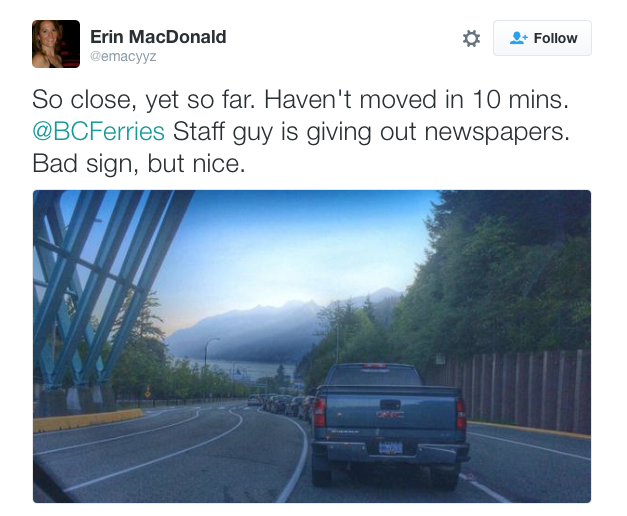 The line started to finally move and, with literally 4 cars to spare behind me, I made it in. Relief, excitement and a gasp of joy! I was on!

I’ve loved ferries since my first trip from Prince Rupert in 1999. I visited Haida Gwaii with my Katimavik group and was amazed at how cool it was to drive into the bowels of a boat that size. For those who do it regularly, it’s par for the course. Unless you’re travelling to Manitoulin Island in Ontario, driving onto a ferry is a rare occurrence.

It still makes me giddy.

I spent most of the trip outside on the deck soaking up the sun, breathing in the fresh sea air, taking photos and people watching. It was a beautiful, warm day, with barely a cloud in the sky. I couldn’t imagine a better place to be and I was officially on my way to Tofino!

Throughout the 2 hour voyage to Nanaimo, I looked out into the horizon hoping to catch sight of whales. I’ve had an affinity for orcas since I was a kid.

I’ll never forget coming into port at Skidegate on my trip in 1999. I was down in the cafeteria when I caught sight of a spout of water shooting up into the air. I ran up and onto the deck, excited beyond words at childhood dreams coming true. They weren’t orcas, they were humpbacks, but I didn’t care. To witness a horizon adorned with whales in their natural environment is a magical thing. I’ve never been a religious person, but grasping the magnitude of this other world was definitely a spiritual experience. It made the world feel so huge; so undiscovered. It made me feel small.

I didn’t lose hope at catching sight of more until Nanaimo’s harbour appeared in the distance. Disappointment flashed through me, but excitement at being closer to Tofino made up for it in spades.

Nanaimo was like many B.C. harbours. Boats were heading out to sea and planes were taking off from its shorelines. Definitely pretty but not somewhere I planned to visit on this trip. I gathered my belongings, went downstairs to my car and got ready to disembark.

Getting off a ferry always feels lickety-split. It takes no time at all and you’re on the road again. I had burnt a bunch of new CD’s for my travels and saved surf inspired tunes for this part of the drive. I popped it in and took off to the next destination – Coombs’ The Old Country Market. 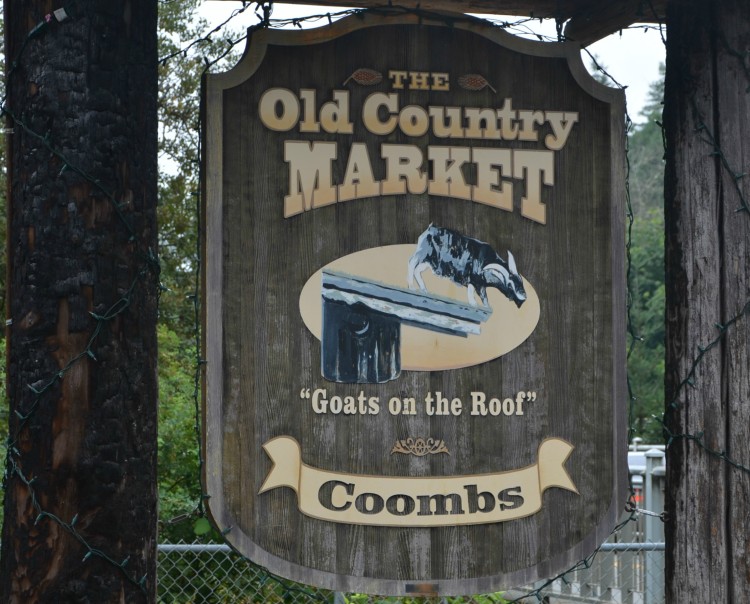 Goats on the Roof

I first heard of the “Goats on the Roof” from my friend Kent. He loved that I was headed to Tofino and told me it was a place I had to go visit. “Google it! You’ll see!”

I was in disbelief. Seriously, WTF is this place??

If you’re headed to Tofino, it’s on the way and you’ll get a laugh. There wasn’t much to Coombs itself, from what I recall, but “Goats on the Roof” was undeniably funny. It’s not everyday you see goats chilling out, munching down grass on top of anything, let alone a restaurant and country market. It’s bizarre, awesome and completely random.

For the full story of how the market ended up with a sod roof, and how goats became the official maintainers of the sod, I suggest you visit the site.

The market itself is a robust tourist destination. It has just about everything you could ever need; lots of souvenirs and shops to wander through. Kent told me about a fantastic pizza joint in behind, but  I completely forgot about it both times I visited!

My main purpose was to try to see these famous goats and save money by picking up fruit there. I’d be warned that produce was pricey in Tofino and, being a fruits and vegetables nut, it was a priority for me to have it on hand.

I wandered around for a bit, picked up my groceries and decided to hit it up again on my way back to Vancouver. I really wanted to get on the road and I knew the next stop on my trip was going to be very special. I was almost more excited for it than Tofino.

Back on the road 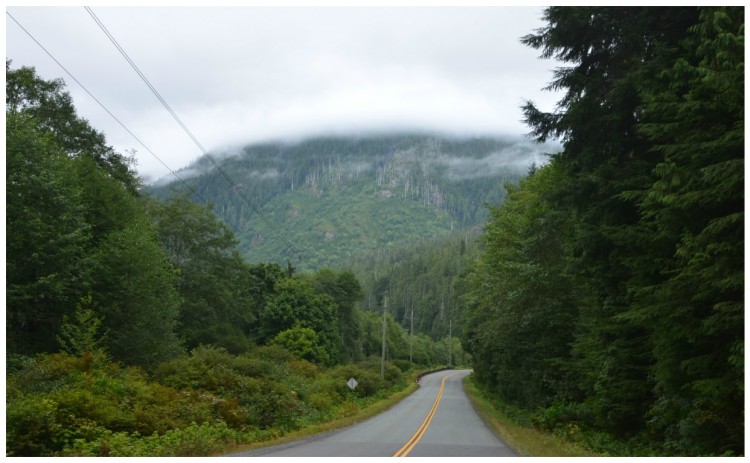 It wasn’t until I got to the point above that I really started to feel like I was headed to the furthest point on Canada’s west coast. The trees got increasingly bigger and more lush. The air felt damp and the cloud cover touched the tips of the tree lines.

To get a sense of the trip, watch this time-lapse. It always takes me back. The first part of the trip is fairly normal and easy driving, but the closer you get to the coast the more crazy it becomes. There isn’t much space to pull over and taking pictures is almost impossible.

My next destination was MacMillan Provincial Park. A relatively short 19km from Coombs and home of Cathedral Grove. It didn’t take me nearly as long as expected and I breezed right through before I even realized I had arrived.  I had to turn around and head back in to park. 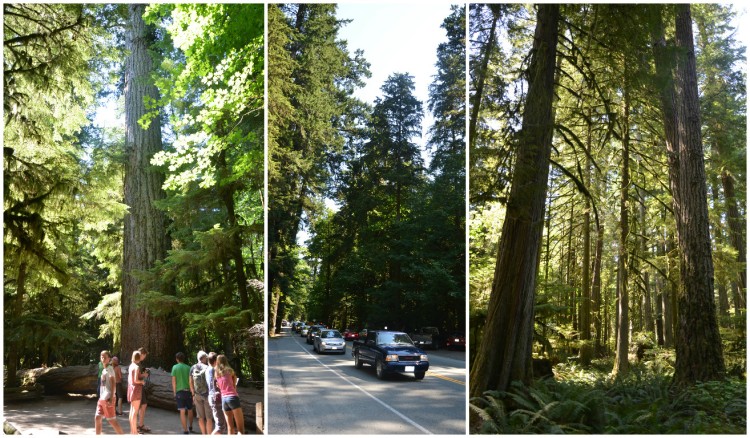 If it wasn’t for the cars along each side of the road, you could almost miss it. And, yet, how can you miss trees THAT big? 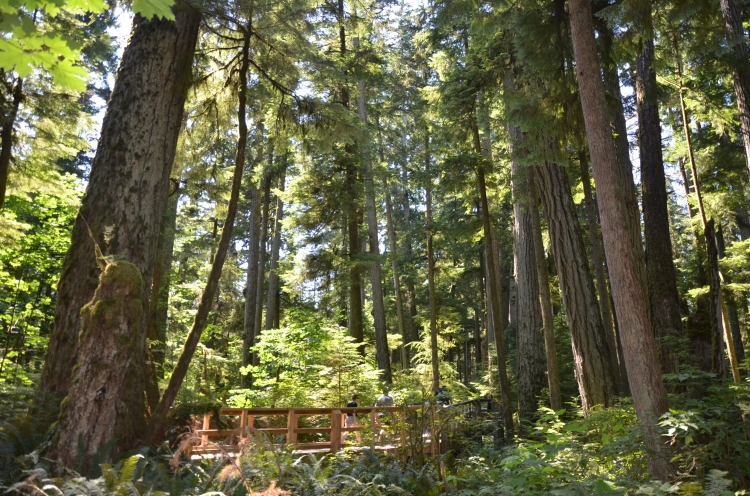 Cathedral Grove is protected area of giant Douglas Fir trees, some over 800 years old. Many are not that old, a fire destroyed a large swath about 300 years ago, but even these “younger” trees are massive.

I type this out with a big of a lump in my throat thinking of my experience there. I’d spent months before my trip browsing images of the trees and pathways. My anticipation levels were pretty high, but I don’t think I ever prepared myself for what it was and how it could make me feel. 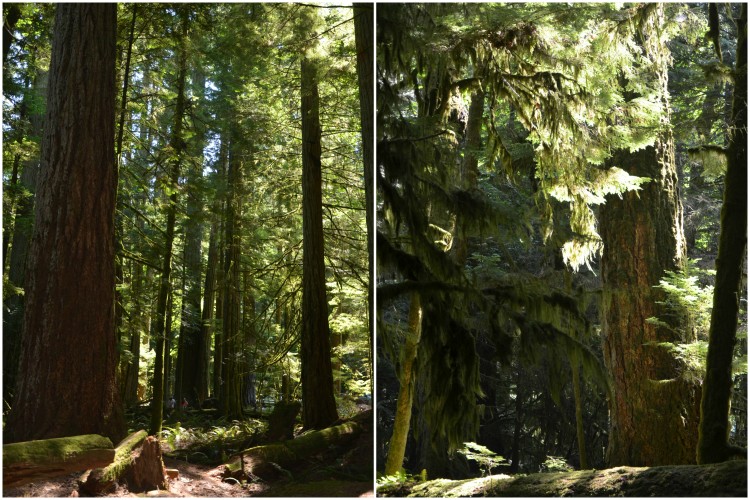 The environment, and trees especially, has always been sacred to me. This mentality attributes itself to the name of my blog, “Wild and Found”.

If there is anywhere I feel most myself, most found, it’s outside in wild and natural spaces. To share space with trees who eclipse 21 times my lifespan humbled me. It literally brought me to tears and I’ve never had that kind of reaction before in the wild.

Midway through the first trail I sat myself down and called my Mom. For the first couple seconds I couldn’t speak because I was fighting back tears. My mom thought something was wrong until I started babbling about trees and huge and “Oh my god!”

At that point she knew I’d made it to Cathedral Grove. She sat listening to my emotional mess pouring out over the phone about how thankful I was they’d protected them. Questioning how anyone could ever want to cut these ancient trees down.

We laugh at it to this day when I talk about my trips out west. Now it feels so silly and yet, I have to appreciate that my reaction was authentically human and pure. 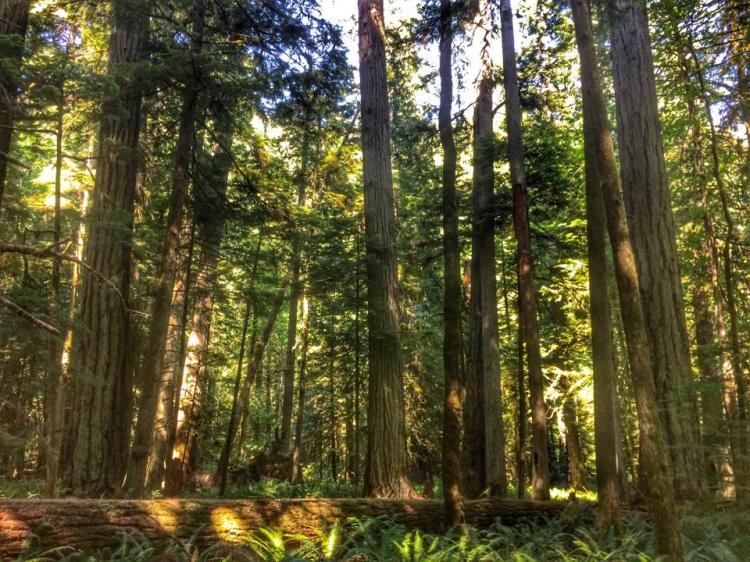 They call this place Cathedral Grove and it lives up to its name. It is in every way a place to worship, to find calm, to bear witness, to pour out your soul. I did all of that.

It’s an incredibly special place in Canada. I am so proud that we have chosen to protect it, and areas like it. I am so grateful to those who fought to protect it. Our country is richer for those decisions. It’s important that future generations have access to places like these.

I had a hard time leaving that day. It kind of felt like saying goodbye to an old friend; one who you love dearly but live far away from. It pulled at my heart and made me look back, over and over. Thankfully, I would have the chance to revisit on my trip back to Vancouver, but now I was officially off to Tofino… 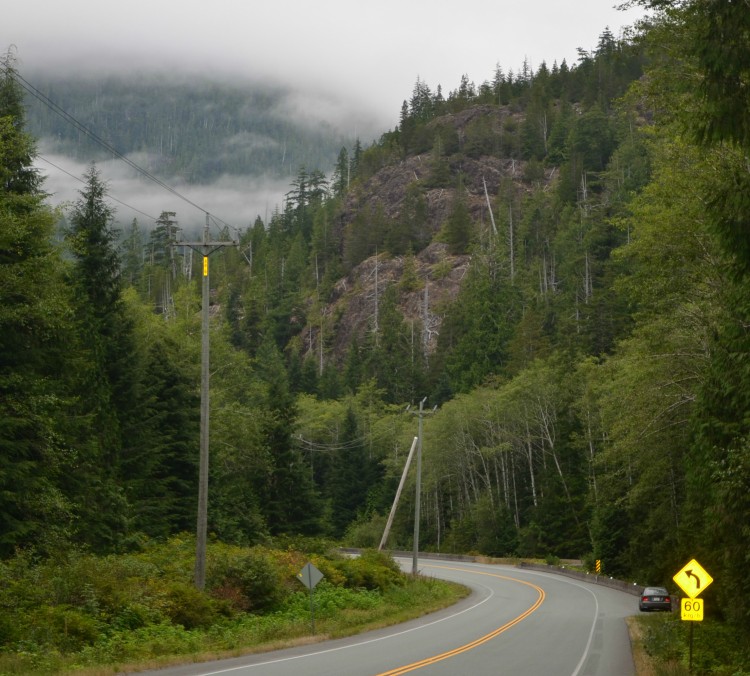 2 thoughts on “West Coast Wild: The Road To Cathedral Grove”