Teams from around the world came together this month for the 2017 World Dog Sledding Championships, at Haliburton Forest and Wildlife Reserve. I was fortunate to be able to attend and learn about this fascinating sport. It also felt fitting that the first #Canada150 event I attend, be one with a long Canadian history!

The competition happens every two years, in partnership with the International Federation of Sleddog Sports (IFSS), and this year also the Canadian Association of Harness Dog Sports (CAHDS). 2009 was the last time it was hosted on Canadian soil.

Prior to attending these championships, my sole interest in dog sledding could be attributed to a childhood crush on  Yannick Bisson and an old movie called, Toby McTeague. Most people won’t know what I’m talking about, but if you lived in an area where your TV only had 3 channels (one being the CBC), you probably do.

When I discovered the World Championships were coming to Haliburton, my childhood memories of the sport flashed through my mind. I knew I wanted to go, tried to recruit my family, but ended up going by myself.

The weather was incredible, which made for a beautiful drive up to Haliburton.  I hadn’t been in ages, and the drive was a strong reminder to make the trip more often. If you haven’t ever been, I highly recommend it.

My last trip to these parts was to visit the Wolf Centre, which is just up the road. I hadn’t ever been to the actual Halliburton Forest and Wildlife Reserve site and was blown away by the how stunning the trails and scenery were.

The parking lot attendant told me I’d arrived just in time to catch the start of the women’s Pulkka races. I had no idea what a Pulkka race was, but I was happy to able to support our Canadian women.

As I made my way towards the start line, I had the pleasure of walking through both of the dog yards. There were vehicles representing local provinces of Ontario, Quebec, though some came so far as Wisconsin and Alaska! Talk about a road trip! 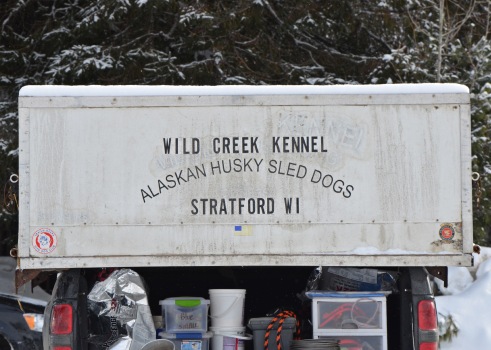 Talk about a road trip!

ATV crew hanging out before the races
Team Sweden had a large presence and were easily identified by their bright blue outfits. They were clearly a united team and serious competitors at the event. It was a treat to see competitors attending from so far away.

Wandering through, I was immediately taken aback by the large variety of dog breeds and their athletic, muscular frames. It became very clear that they truly were elite athletes, bred for a unique and challenging sport.

Can’t help but wonder what the left side dog is thinking about me!

Relaxing before the races.

So chill!
The venue was much more compact than I expected, which made it a rather intimate experience for spectators. Having visited the website multiple times before my trip, I’d expected a completely different scale and set up. I couldn’t help but wonder how the venue would’ve managed larger crowds, but was perfectly happy to be so close to the action.

The starting line was a buzz of activity. I had seen photos earlier in the week of the Race Marshall and was excited to see him in person. I never did have a chance to chat with him, but I imagine he has some amazing stories. Just look at the badges on his coat! Hudson Bay, Maine, Alaska, Churchill, Labrador!

Handouts were provided to attendees which conveniently explained each event.

I learned that the “pulkka” is actually the toboggan pulled by the dog. Historically, a toboggan was used to carry supplies (like a tent or food) or transport children over long distances. In these races, it weighed approximately 70% of the dog.

The Canadian women had later starts in the heat,  so I was fortunate to see a few of them exit the gates. Once the athletes all embarked, I hung out on the other side of the trail waiting their return. The only rule was to stay far enough off the trails to ensure I didn’t distract the dogs. 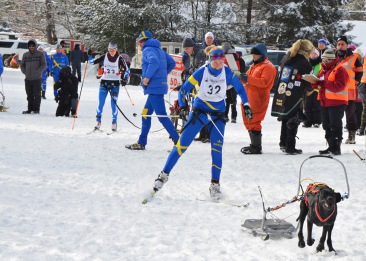 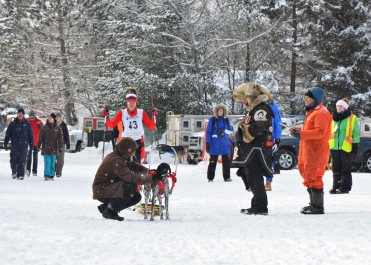 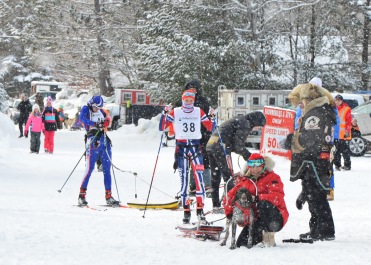 It didn’t take long for the first racer to appear and they all followed suit shortly after. Intervals were only 1 minute long, which made for some exciting finishes. The fastest speed for this race was just over 36 minutes.

Such a great team!

Maija Nivala – Team Finland (World Champion)
One athlete collapsed at the end of the race, and I didn’t blame her. This did not look easy for the athletes or the dogs. I’m a long-distance runner and I can’t fathom completing a race like this!

There was a bit of space in between races, which allowed for spectators to visit with the dogs, get food and refreshments or warm up by the fire.

The variety of competitive events came as a surprise to me. My idea of dog-sledding has only ever been multiple dogs pulling a sled. The 4-dog and 8-dog events were exactly what I was eager to see.

Competitors varied in age, but I was particularly impressed to witness such a young group of men and women competing in this event. Taking on the challenge of a sport like this has never crossed my mind. It’s fantastic to see others involved at such an early age.

As the teams rolled in, I was shocked to see how saliva had frozen to the dogs faces. This happening never occurred to me before. Visual proof of how much energy the dogs are using up on their run.

Support and encouragement from the Race Judge

Amazed by the frozen saliva on the dogs! 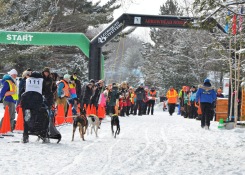 The Swedish team stood out in every way, but particularly when they were setting up the 8-Dog sprint. I noticed a lady in a wheelchair making her way to the start line and smiled at her perseverance pushing through the now. Clearly a member of the Swedish team, I wondered what her story was. As it turned out, she was the owner of the dog team and a former world champion dog-sledder, herself. She was injured in a sledding accident and continues to remain heavily involved in the sport. I just loved hearing that. 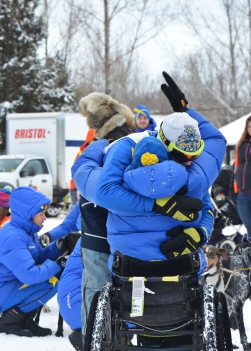 This warmed my heart!

Looking back, I consider her story to be my favourite part of the day. Inspiring!

If there is one thing that stood out regarding the 8-Dog Sprint, it was the noise. I don’t think I’ve ever heard so much barking and excitement in all my life. That said, it was a lot fun to watch.

I’m a firm believer that sled dogs have two distinct personalities. The change that happens when they know they are about to run is a shock to the senses. I won’t ever doubt that they absolutely love competing. They are raring to go. So much so, they are attached to an ATV at the start line in order to keep them from running too soon.

Check out the video below to see one of the Canadian teams taking off. You may want ear plugs!

Jumping up and  down, barking and howling…it is a sight to see and experience!

Holding on for the go signal.

Kei Riley – Team Canada and her team are off to the races!

Once the sleds were out on the course, I joined a group of spectators headed down the final stretch to set up for photos.  It was fun to share the experience with a group of women as happy to be hanging out in the snow, capturing this event, as I was. It’s not everyone’s cup of tea, but we all had a blast.  We jokingly called ourselves the “Pup-arrazzi”.

All ready for the sledding teams to come down the hill

Spectators in place along the final stretch

We hadn’t gotten ourselves completely positioned in the ditches and the first sled was already coming down the final stretch. It just goes to show how fast the dogs are pulling these sleds. They ran 14km, with the fastest time coming in just over 27 minutes! So fast! 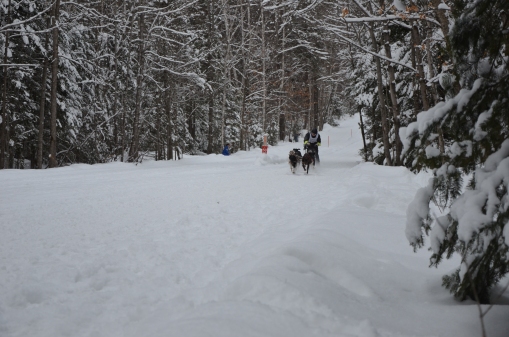 We spent the next 40 minutes yelling back and forth at each other as competitors made their appearances.  “Sledder is coming….YOUR SIDE!” It was harder to capture them buzzing by than I expected, but simply being there to experience it was what it was all about. The dogs looked exhausted and joyous all at once. The sledders urged them on to the finish line.

If there was one take away from watching this event, it was an appreciation for the love everyone had for it. It is unlike anything I’ve watched and I look forward to seeing races like this again in the future.

If you missed this race, I encourage you to look for others that may be happening in your area. It is a truly remarkable sport and a fascinating sport to experience. 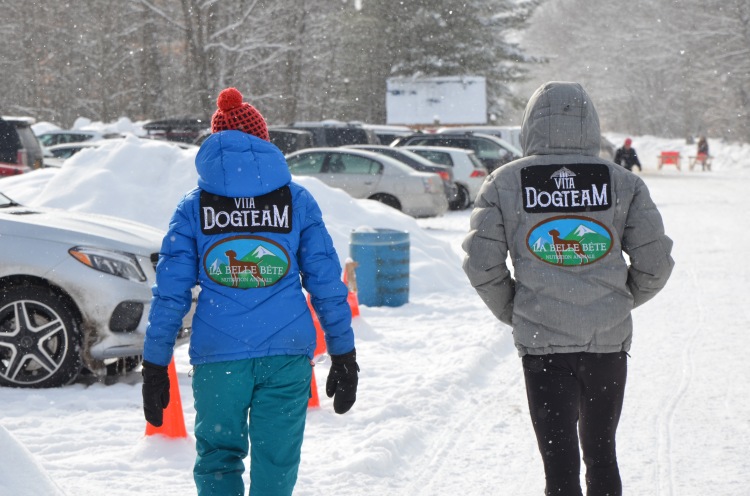 3 thoughts on “So Mush to Love: 2017 World Dog Sledding Championships in Haliburton”